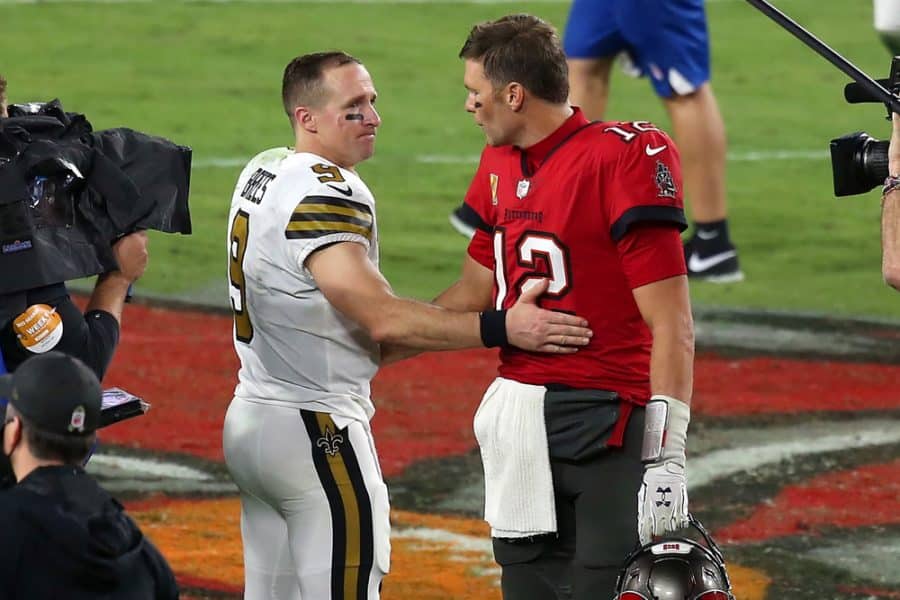 The Bucs defeated New Orleans Saints 30-20 in the Divisional round, posting a win over the team from Louisiana following two heavy losses during the regular part of the campaign. Tom Brady and Leonard Fournette had the offense going throughout the entire game, but the defense was what made the difference in the crucial moments of this matchup.

Tampa’s defenders picked Drew Brees three times, twice in the finish of the fourth, when the Saints had to chase the result. The first time was with the guests leading 23-20, and after that pick, Brady led a 20-yard drive, finishing it himself with a one-yard run to reach the endzone.

He had two touchdown passes, one to Mike Evans and the other to Leonard Fournette, who was the driving force in Tampa Bay’s offense. The strong running back had 63 rushing and 44 receiving yards, and was the key to closing the game. After the final interception on Brees, Fournette was constantly carrying the football, spending time while also moving the line of scrimmage.

Ronald Jones had a solid performance with 13 carries for 62 yards, keeping the pressure on the Saints’ defense once Brady and Fournette had to catch a break.

Drew Brees had miserable 134 yards with one TD pass to Tre’Quan Smith, and three picks. Jameis Winston also threw one TD pass to the same player, 56 yards long. Smith finished the night with 85 yards in three receptions, while Alvin Kamara posted 105 yards from the scrimmage.

Brees was in the middle of attention following the event, because everyone wanted to know is he coming back next year. He didn’t give a specific answer but told the reporters that he needs some time to think over everything before making a final decision. The Saints’ QB has one more year on his deal with the team.

This is yet another frustrating year for the franchise from New Orleans who was one of the top candidates for winning the Super Bowl trophy.

As for the Buccaneers, they are moving according to the plan. One game separates Brady and his bunch from the Super Bowl at the Raymond James Stadium. However, that one is the toughest possible, against the Green Bay Packers and Aaron Rodgers in Wisconsin next Sunday.