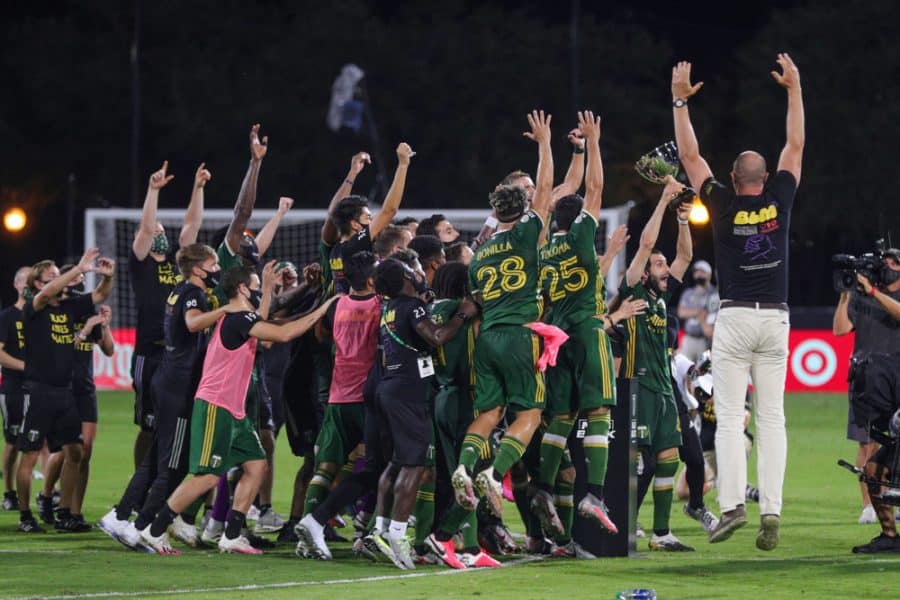 Two more MLS teams appeared in the CONCACAF Champions League this Wednesday night. Both of them played without winners with the respective rivals from Mexico – Portland Timbers with Club America, 1-1 and the MLS champs, Columbus Crew with Monterrey, 2-2.

Timbers have scored in the seventh minute of the injury time to avoid a defeat against Club America. To make it even more dramatic, the hosts netted from a penalty handed to them due to the handball of one of Club America’s players.

Felipe Mora rose to the occasion, beating the pressure and goalkeeper Guillermo Ochoa, giving some hope to his team before the rematch in seven days time.

The visiting side also scored from the penalty in the injury time, only in the first half. Claudio Bravo brought down one of the rivals’ players in the box, which resulted in the referee pointing towards the spot. Roger Martinez didn’t waste such a present but scored in 45+1 to shock the home team.

Even though Portland constantly attacked during the second half, they couldn’t score until the last moments of the match. There were several incredibly good chances for the hosts to net, but their players were either offside or inaccurate. It needs to be mentioned that Timbers had some of their crucial players injured for this match – Sebastian Blanco, Jeremy Ebobisse, Jaroslaw Niezgoda, and several others were all out.

Columbus Drops a Win in the Last Moments

In the other game of the night, the MLS champions, Columbus Crew was left empty-handed in the last minute of their clash with Monterrey. Jose Alvarado’s stunner in the third minute of the injury time saw the guests leveling the score at 2-2, breaking the hearts of the home team’s players and fans.

Previously, the Crew managed to come back from behind and turn the result upside down with Lucas Zelrayan’s goal in the 87th minute of the game. The Crew had a 2-1 led, and it looked as they controlled the situation. However, the feisty Mexican team didn’t surrender, and that earned them a big goal in the last moments.

Club America took the lead in the ninth minute with Ake Loba using a cardinal mistake of Aboubacar Keita. Milton Valenzuela made things even in the 65th minute after Zelarayan’s assist.

Facebook Twitter LinkedIn Pinterest
DON'T MISS IT Antonio Brown Stays in Tampa Bay, Signs a One-Year Deal With the Buccaneers DON'T MISS IT UP NEXT NFL Draft: Jaguars Select No.1 Trevor Lawrence, Quarterbacks Lead the Way UP NEXT