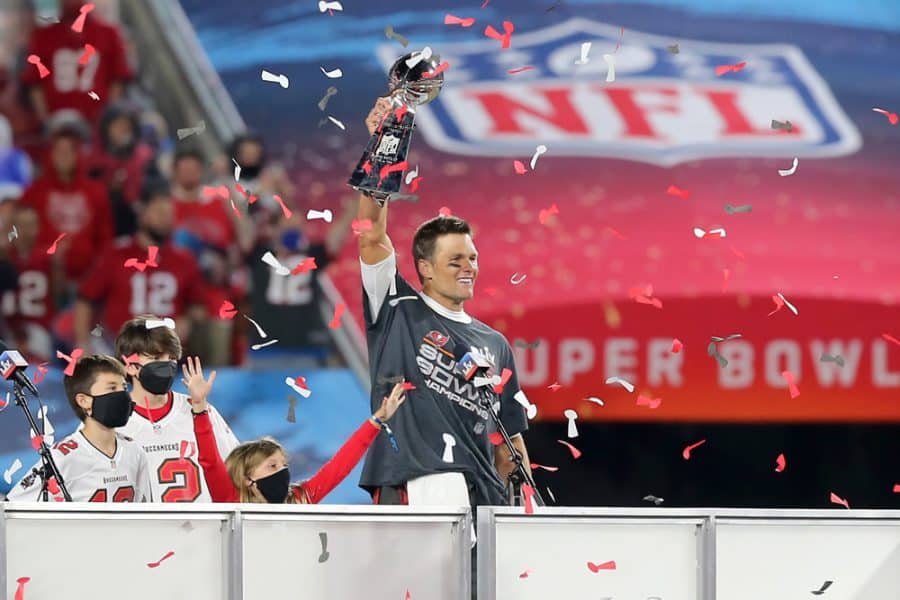 Tom Brady and the rest of the superstars were controlling the offense, while on the other side, Tampa Bay’s defensive team was at the highest possible level. They prevented one of the most productive teams in the last decade from scoring a touchdown, pressuring and chasing their starting QB and the 2018 NFL MVP, Patrick Mahomes.

Mahomes didn’t have a chance for throwing a TD, and all the Chiefs’ points were scored after field goals. He would end the night with two intercepted passes, three sacks, and 270 passing yards. According to his words, this was the lousiest game he played in a long time.

Two of his favorite targets, Travis Kelce, 133 yards, and Tyreek Hill with 73, couldn’t compete with the Buccs’ defenders, who had one of the best defensive performances in the Super Bowl.

Brady had no troubles against the Chiefs’ defenders, throwing for 201 yards and 21-for-27, with three touchdowns passes, two to Rob Gronkowski and one to Antonio Brown.

Gronk delivered the first couple of the match, while on the other side, Brown had one just before halftime. The fourth score for the Bucs was after Leonard Fournette‘s effort. It was a 27-yard rush, that completed his fabulous night in which he recorded 135 yards from the scrimmage, 89 on the ground, and 46 via air.

It was an excellent finish of what could have been a terrible year for the former Jacksonville Jaguars’ start, which was released earlier this season.

Tampa Bay Buccaneers became the first team to win the Super Bowl at its stadium, and only the fourth that played all matches on the road before lifting the trophy. Just to remind you, the Bucs met with the Redskins, Saints, and the Packers on their way up to the last night’s event.

As for the Chiefs, Mahomes and the boys experienced their second loss in the postseason against Tom Brady. Even though they defeated the Bucs in the regular part of the campaign, 27-24 in Week 12, Andy Reid’s side underachieved badly when it mattered the most.

But even with this loss, Kansas City is still the biggest favorite for winning the 2021 championship.