In the closing game of the MLS’s Tuesday’s program, Houston Dynamo made a massive upset with defeating Sporting Kansas City. More surprisingly, the final result was 2-5 for the guests form Texas.

This was the first win for Dynamo, who was sitting last in the Western Conference before this match. Meanwhile, SKC is the No.1 in the standings with four points more than the Seattle Sounders.

Houston played confident right from the start-up until the end, and they looked like the better-placed team, not SKC.

The 32-year old Colombian midfielder, Darwin Quintero scored two goals and posted one assist, and was the difference-maker in the moments when the match was on the line.

His assist helped Alberth Elis open the show at Children’s Mercy Park, after 17 minutes of play. It was an indication that this game won’t end as many expected.

SKC bounced back nine minutes later with Johnny Russell’s goal, but the hosts couldn’t create the swing and take the lead. Instead, they allowed a goal in the worst possible moment.

One minute before the end of the halftime, Elis assisted Christian Ramirez who hit the back of SKC’s net. It was a massive boost for the guests, who silenced 2,000 fans attending this match. This was the first sports event in KC with the audience after March.

Those lucky ones who were watching the match from the stands had the opportunity to see a furious start of the second half, with one goal on each side. Niko Hansen netted for Dynamo, just three minutes since the kick-off period, but 60 seconds later, Gadi Kinda replied on the other end. It was just an announcement of the fiery 15 minutes, which came afterward.

Until the end of the game, we saw Quintero’s show. The experienced midfielder buried all the hosts’ hopes of making a comeback.

His first goal came after 57 minutes of play, with Darwin Ceren perfectly assisting to his teammate, who would then routinely execute with a precise shot. Four minutes later, Quintero once again put his name on the scoresheet, setting the final result of this interesting contest.

Dynamo awaits Minnesota United on September 2, at 8 pm ET. SKC has a clash with the Colorado Rapids, on the road, this Saturday. The game starts at 9 pm ET.

Facebook Twitter LinkedIn Pinterest
DON'T MISS IT Los Angeles Clippers Send a Strong Message by Smashing the Dallas Mavericks, 154-111 DON'T MISS IT UP NEXT Four Potential Destinations for Lionel Messi UP NEXT 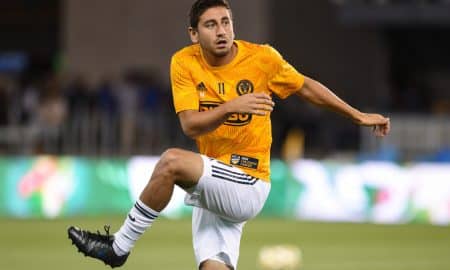