Home
SOCCER
Sevilla Wins the Europa League for the 6th Time, Defeat Inter in the Finals, 3-2

Sevilla Wins the Europa League for the 6th Time, Defeat Inter in the Finals, 3-2 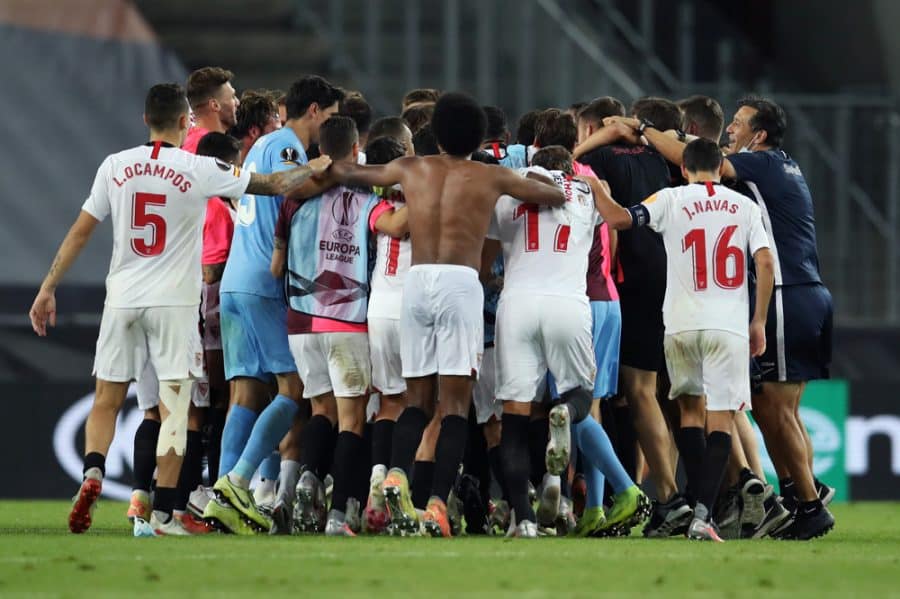 The greatest team in the history of the Europa League justified its status, winning another final. This time, Rojoblancos routed Inter Milan, in a very interesting final, which saw them coming on top with a 3-2 victory.

Sevilla is still perfect in the Europa League finals, winning all of its six appearances in the title matches. They are the side with the most trophies in this competition and are moving the limits throughout the last two decades.

This match was superb, with an excellent plot, filled with twists and excitement.

At the very beginning, Diego Carlos made a penalty on Romelu Lukaku, taking down the Belgian international in the box with a reckless tackle. His team had a one-goal deficit three minutes into the match, which was something unexpected. Lukaku himself scored from the penalty.
It was his 11th straight game in which he managed to put his name on the scoresheet.

Luuk De Jong equalized in the 13th minute, not allowing Inter to have a lead too long. The Dutch forward headed the ball besides Handanovic after Jesus Navas’ cross from the right,

De Jong was in the middle of attention once more, shortly following his first score. Ever Banega’s set-piece was perfectly used by De Jong, who once again scored with a header.

Some believed that Inter might fall down mentally after this development, yet that didn’t happen. Nerazzurri responded with an increased dose of aggressiveness and an equalizer three minutes later, in the 36th. That goal was delivered by Diego Godin.

The first half was memorable, unlike the second. The latter 45 minutes were marked with Romelu Lukaku’s tragic actions. The Belgian would miss a fantastic opportunity to score at 2-2 and to give his team a much-needed lead. A one-on-one situation with Sevilla’s goalkeeper following one counter-attack will definitely haunt Inter’s striker for the years to come.

But that wasn’t the worst thing.

😱 Romelu Lukaku is the first player to score an own goal in a UEFA Cup/Europa League final since 2001, when Alaves' Delfi Geli put past his own goalkeeper in their 5-4 final defeat to Liverpool pic.twitter.com/EOkdIDaH8P

In the 74th minute, Carlos performed a bicycle kick, with the ball going besides the goal, but Lukaku put his foot on the path, diverting it into his own net.

Eventually, there was no change of result, as Sevilla defended very well, using all of their experience to stall the game and to put pressure on Inter.

As for Lukaku, he became the first-ever player to score a goal and an own goal in the finals of one European competition.

Facebook Twitter LinkedIn Pinterest
DON'T MISS IT Lillard Injured as Portland Trail Blazers Suffer a Blowout Loss to LA Lakers, 111-88 DON'T MISS IT UP NEXT Clippers Win Against the Mavericks, 130-122, Luka Doncic Questionable for Game 4 UP NEXT